On Our Way Back 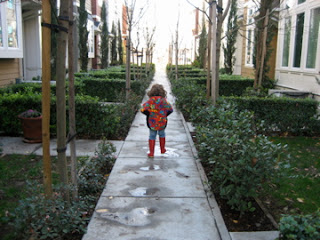 It's good to be writing again.

Last week, we had the biggest collection of my family in one place since Peter & Roni got married over 3 years ago. Every last bit of it was fantastic, but the let down after everyone departed has left me wondering what to do with myself. If the weather were better, I'd be spending late nights out under the stars. As it is, the weather has been, well, weather so I've been inside cleaning instead. If only I'd managed to do this before the relatives came, they'd all have been so much more favorably impressed...

I haven't been doing the house cleaning all by myself. Oh no. Roomba's new battery arrived, and I finally had the time to charge it up and try it out. Yesterday, I had Roomba clean the living room twice, because I could. Also because the first time the dust bin got so full it started leaking stuff out. Yuck. But the rug looks fabulous.

And, as an aside, I still love Roomba. Man, do I love my robot. The idea of this little round thing trundling over my floors just makes me happy. Before you laugh, I'm not the only one who blogs about loving a vacuum. Hah! When I first got Roomba, I wondered how anyone would want to be without one. And then I realized that there are a whole bunch of stupid little things that go wrong with it. It's a gizmo lover's gizmo. Occasional trouble-shooting is part of the fun! The icing on the cake is that the iRobot customer support have been amazing. My little robot minion will be cleaning my floors for a long time to come.

But I digress. The other bit of good news around here is that Andy is finally back on his feet for real, and is even contemplating getting around without a cane tomorrow. Wahoo! Elise is loving having her daddy back to "normal." When he offered to carry her upstairs to bed last night I thought she would faint dead away from the joy of it. If nothing else, she now knows that people can be inexplicably sick and then get better. And hey, we grownups have figured it out too, so everybody wins.

Speaking of the kiddo, she managed having lots of company here quite well. It's easy to get over-stimulated, but she mostly managed to find ways to take breaks in the action and stay sane. And she really, really enjoyed having so many cool new adults to play with. She especially enjoyed getting to know Aunt Linda (my dad's sister.) Here was an adult who brought her books! And read them! And played playdoh just the right way! At the end of the big family visit before "the Ls" headed back to MI, Linda told Elise that they'd be back in June. When I got Elise to the car, she let out a wail and asked, "Mommy, when will it be JUNE?!!!!" (No pressure on making it to graduation there, Geetha.)

It was time to go back to school on Tuesday. Elise dragged herself around the house thinking of every stall she could muster because she did NOT want to go back. Oh no. "I don't WANT to get back in the groove, Mommy." Visualize a sad shake of the head to go with that. Oh my. When we arrived, some of the kids were playing with Legos. At that point, I became invisible. I had to ask for a kiss goodbye. This was strange.

Even more strange was the report from the teachers when I arrived to pick her up that afternoon. She'd played with other kids even to the point of some self-directed conflict resolution. She ate lunch, she took a nap, she participated in the classroom activities. I think they sent me home with the kid I dropped off, but based on their description of the day I can't be sure.

I spent a good chunk of Elise's school day on the phone trying to figure out what to do about our phone. With a building that's just over three years old, one wouldn't necessarily expect the phone lines to fail. However, they have and now we wait until the 16th to have someone come out and rip out the shorted-out stuff. Ironically, by adding a "call forwarding" feature to my phone package, I actually lowered our monthly phone bill. By just enough to cover the fee for adding the feature in the course of the remainder of our lease. None of it makes sense. Nor do I, but at least now my friends and family can call me to confirm it...

And finally, I wanted to mention that Andy's sister Amy sent some very cool bug-finding toys for Elise this Christmas. A little vacuum for slurping up bugs, a habitat to put 'em in, and a projector thing apparently for torturing them as you watch their shadows projected on the wall. Wonder of wonders, this vacuum is the first white-noise producing machine that hasn't sent our girl screaming toward the hills. In fact, she even pushes the "turbo boost" button. Elise was so excited to go out and look for bugs the other day that I didn't have the heart to tell her that the pickings would be slim what with it being winter and all. But, she took her magnifying glass and her bug vacuum and we went anyway. Elise spent eons carefully looking at flowers, leaves, sticks and rocks with the magnifier. It was awesome. 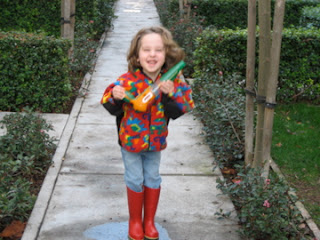 Elise could not have been any more thrilled about the visit than Aunt Linda was. That is just my cup of tea to have someone willing to snuggle into my lap and let me read to her for hours (alas my own girls have long outgrown that, though they do have many other wonderful qualities that they were noticably lacking at age four). Plus Elise knows just how to play with play doh. She draws wonderful and creative pictures. I, too, am already counting the days until June when we can visit again. Maybe Geetha better plan on taking a job in the Bay Area so we can continue to have that extra reason to visit the Steingruebl World.