Wanna take a good look at what the sky used to be like? And maybe spend some time thinking about your energy consumption?

This Saturday, people (and cities!) all over the world are turning off lights from 8:30-9:30pm local time.

Visit the nice Earth Hour people to see what the fuss is all about, and to get some ideas for your own Earth Hour celebration!

Dogs in the Tot Lot

I used to like dogs a lot. And I still do. It's their owners who sometimes leave me unhappy. Take, for example, the events of this morning.

Hello-
I was at a neighborhood playgroup at the tot lot at Cahill Park this morning, when an issue with a dog arose. A parent had brought his son to play, but he also brought his dog into the fenced tot lot. Always leashed and well-behaved, but still, a dog in an area designated for children. All of the moms who left their dogs at home were surprised at the dog owner's defensive response to their request that he tether his dog to the fence on the outside of the lot.

The situation degenerated into a group confrontation, and an angry denial by the dog owner that there should be any restriction on his dog being in the tot lot. His kid was there playing, his dog likes to play on the equipment too, he keeps the dog leashed and always picks up poop so he reasoned that he had been unfairly singled out by moms bent on making their own rules regarding playground use. I felt badly that this parent chose to leave rather than simply keep his dog outside of the gate. Given the perpetual issue of out-of-control off-leash dogs in the grass at this park, it doesn't seem an unreasonable request to have one dog-free place at the park for children to play.

It is my understanding that dogs are not permitted inside the gates of fenced tot-lots, but I don't see this posted on the parks website so now I'm wondering just exactly what the policy is. I walk from a bit of a distance for my child to use this beautiful playground, but it's not worth it for me if it is a dog playground too. Thank you in advance for your time and attention to my question.

The thing that killed me about this whole interaction was that it started out friendly, and only got ugly when the dog-owner decided to make it so. Our little playgroup loves meeting new folks and so the folks who bring snacks share with everyone and people make a point to introduce themselves to anyone they haven't met before. This guy was welcomed even with his dog in tow, but the rest of the people in the rather crowded play lot asked him-nicely I thought-to keep his dog outside the fence. The huffy, "is it a rule or is it an ordinance" questioning was just belligerent and he was probably right to split after behaving that way.

My feeling on this is that the guy loves his dog (a very nice one by the way) and is a bit blinded by that love. He knows he is at the very least pushing the limits of social acceptability by letting his dog run up and down the slides, and didn't want to be called on it. A lot of his bluster seemed to be him trying to convince the universe at large to be the way he wanted it. Probably a losing proposition, but for today it just made him look like a jerk. 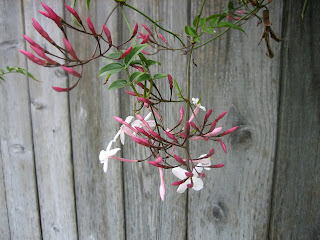 As one loyal reader recently pointed out, it's been some time since I managed an update here. I'd like to make up for that with a post about springtime at our house. We've been getting this joint ready for a spring and summer, and are now set to spend a lot of time outside.

First, there is the new gazebo. Our patio has a southern exposure and pretty much bakes any time there's even a glimmer of sunlight. An umbrella doesn't really cut it, but so far the gazebo is excellent. Lots and lots of patio-based picnics this past week. 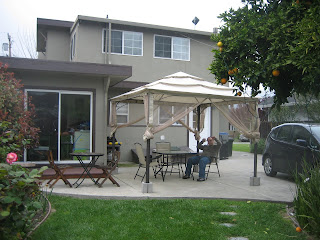 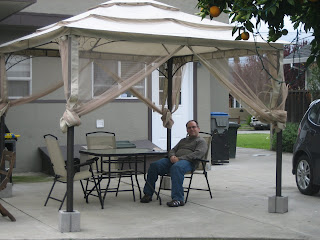 Then, the real excitement. I had mentioned in passing to our neighbors that I've been looking on craigslist for a swingset for the yard. Andrea (who happens to be the mom of our most excellent new sitter, Edie,) got a thrilled look on her face and said, "We have one that we need to get rid of!" It had been given to them, and they gave it to us. Wonderful! Yesterday afternoon, they helped us carry it across the street and Elise carried the (detatched) swings all by herself. A real team effort. 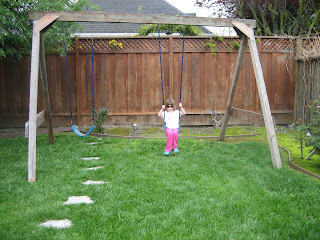 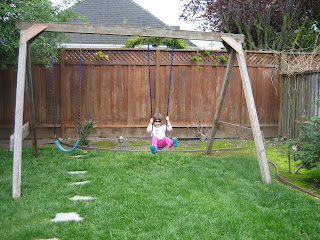 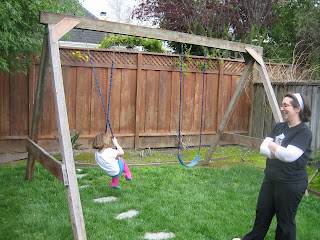 But don't take my word for it, listen to what Elise has to say about it:

As inspired by a favorite parenting blog and some disappointingly high cholesterol levels, I'm marching through March. This means making some better food choices and getting moving! My key is to make some changes I can stick to.

My goal this month is to keep moving. I've been so disappointed in my Sharks for not moving their feet lately, so I'm going to move mine! My pedometer attached to my hip, I'm challenging myself to move as much as possible. I'll put some numbers and progress updates here, but if you're just dying to know how much walking I'm doing every day, you'll have to find me on Facebook.

Who wants to play too?