What do we do here at Steingruebl World Enterprises when it's hot and miserable outside? Well, mostly we complain and get all grouchy with each other. But today we had a better idea!

A few months back, I bought upholstery fabric off eBay that ended up being about $7/yard after shipping and all. Our dining chairs have been looking scummy, and I figured I'd fix 'em. How scummy were they, you might ask? Oh let me show you. 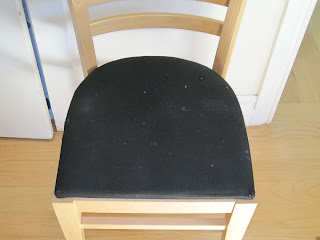 And if that was not scary enough, here's the close up: 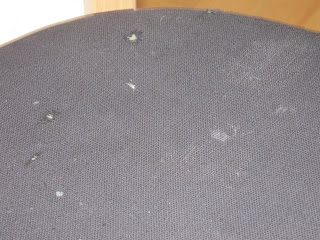 So, yeah, we needed a change. 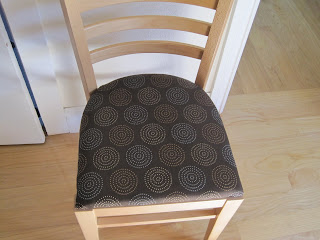 It's going to be really, really, really stinkin' hot this week. Really hot. I am not planning any other home makeovers, though. Unless someone has a cheap and easy to follow plan for installing your own central air conditioning... 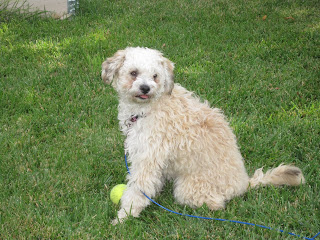 I have to admit, I love doing dog-related stuff. This one was a necessity, so I don't feel too badly about indulging. Daisy wasn't too matted, but she had some long, curly fur on her that needed the attention of a qualified professional.

Luckily for us, there is a mobile dog groomer in town! Wahoooo! This is a good thing as Daisy tends to get a little excited when there are other dogs around. (We keep reminding ourselves that we meet with the trainer next week.) So, today was Daisy's lucky day.

Here she is, trying to simultaneously lick Elise and pose for a picture: 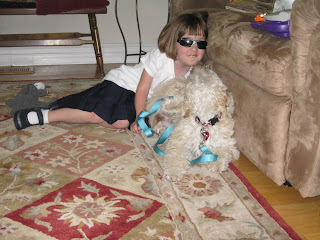 That Daisy is fast -see how loooooong her fur looks when she's on the move? 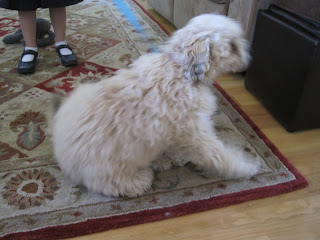 And, here is a more reasonable "before" picture that really shows off the furriness with which she was so encumbered: 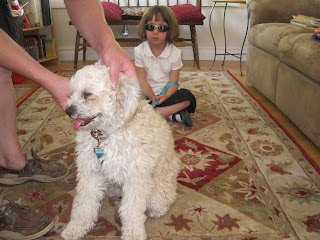 Isn't she just a gigantic fluffball? She looks more like a bear than a dog, really. Everyone thinks that she's a bigger girl than she actually is, given the extra 3 inches she had all around. The following picture was taken right around the time Paula (the groomer) mentioned that Daisy is a lot like a chia pet. She kinda is. 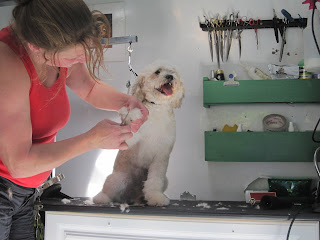 I love the clippers with an attached vacuum hose. Can I get one of those for our house so I can do Andy's hair inside without a huge mess? I'm glad Daisy got a bath in the truck (as well as the haircut) because ohmahgoodness that was an amazing amount of fur.

But look! Here is our Daisy in her natural environment-resting under the dining table. Note how well camouflaged she is here: 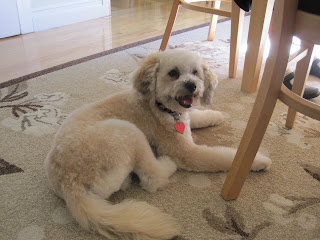 And finally, because every beautiful doog needs a pose outdoors too, I leave you with this picture of our freshly bathed Daisy: 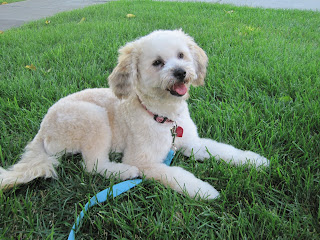 Yup, it's September 11 again. I don't like this day, for a lot of reasons. The biggest one, though? It has given us the collective notion that violent acts of wanton destruction are the sole province of wacky religious fanatics. Specifically Islam based ones. Today is a good day to think fond thoughts toward your Muslim friends and remind yourself that people with brownish skin aren't universally out to get you. Really. Be friendly, give a hug, share some love. Please. And visit the nice people at WhyIslam while you're at it.

And now, I'd like to call attention to more recent terrorist attacks on US soil. The sick bastards calling themselves the "Earth Liberation Front" like to do all kinds of stupid, dangerous, destructive things. Their most recent attack came on September 4th, when they destroyed radio towers in the Seattle area. This wasn't front page news-it was buried somewhere in the backwaters of my local newspaper. Sure, nobody died this time. But these people are terrorists, and I denounce their actions. They are a disgrace to the environmental movement.

Let us also remember the terrorists who kill doctors and wage campaigns of harassment and constant threats against the doctors they don't manage to kill. Today is a good day to remember George Tiller and all of the other doctors and their families who are beset by evil, evil terrorists every day.

Finally, remember the victims of what's-his-name who killed people in Oklahoma City and that guy who sent bombs in the mail. Oh yeah, and that stupid anthrax thing. Terrorism is NEVER justified, no matter how "right" you are and how "wrong" your victims are. It is cowardly.

So yeah, those guys 8 years ago caught our attention. Let's use their stupidity to our advantage and claim it for what it is: a reminder that NO act of terrorism, whatever it is called, is acceptable or tolerated.

I thought I could be good at updating this blog once the kiddo headed for kindergarten, but here we are, near the end of the 3rd week, and I haven't even posted first day pictures. I blame Facebook. It's easier to upload pictures there than here. Also, I have proof that more friends see stuff there than here so it's not just lazy-it's lazy and a shrewd use of resources!

Suffice it to say that school is going swimmingly and we are terribly proud of our kindergartener.

Also, we have a dog.

She came from the Humane Society-we got her on Sunday! Part cocker spaniel, part poodle. At least as far as anyone can tell. My suspicion is that she was bred as a "cockapoo" and was left un-spayed in case someone wanted to breed her. Daisy has some decent manners already, but is clearly out of practice on some of it. One of the moms from Elise's pre-K class has a highly recommended dog training business, and we are waiting to hear from her when she returns from vacation after Labor Day. In the mean time, we're doing our best with the stuff HSSV gave us to read. So far, we're making progress on leash pulling, aggression while on leash, and generally barking like a maniac at other dogs. Less progress has been made with crate training and separation anxiety. It is not going to take much work to help Daisy be the sweetest dog in the entire universe. (We say modestly)

So, there you have it! We're pretty excited around here. And yes, before anyone asks, we are still looking at getting a cat to complement the menagerie. I am insane. But very happy.