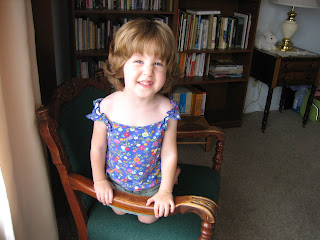 In mid-August, Elise and I spent a week visiting my folks, the Schmiedeskamp grandparents, in Thompson Falls, MT. It was a fabulous trip, and because I've taken so long to get it blogged I'm probably going to forget some of the most important parts. I hope not, because like I said it was a fabulous trip and I'm really looking forward to going back again soon.

Andy took us to the airport, and helped us marshal our stuff at check-in, took Elise for her last San Jose potty stop for awhile, and waved goodbye at the security checkpoint. I made a note to myself to plan this better next time around so that he could be on vacation and come too. At any rate, we had no trouble with the flights. I was nervous that, given past experience, Elise would be pretty freaked out at takeoff and landing but she wasn't. At least not badly. We'd been talking about it for awhile, and I recommend the movie Shae by Air. (Though to be fair, it misses mentioning turbulence altogether.)

When we arrived in Spokane, we were pretty well done with airplanes. It took a good while for us to meander from the gate back to the free world beyond the security checkpoint. Mom & Dad were waiting at the bottom of the ramp for us, and when Elise saw them she broke into a run. "Gwamma Sauw, Gwampa Kawuw!" she hollered, throwing her arms around Grandpa when she got to him. It was pretty fun to see her 1)pick them out of a crowd 2)so excited to see them.

It's about 3 hours from Spokane to Thompson Falls, and generally takes longer when one makes stops to borrow telescopes, purchase fabric, acquire huckleberry smoothies and the like. But it was a good ride. In spite of the fact that we arrived at my folks' house past Elise's bedtime, she was in great spirits. Grandpa went outside to talk to Dima the Incontinent Wunderdachshund, and then let him in to meet us. It's hard to tell who was most excited. The game of run-as-fast-as-you-can-around-the-sofa lasted until both parties were thoroughly worn out, though. Elise got lots of puppy kisses. 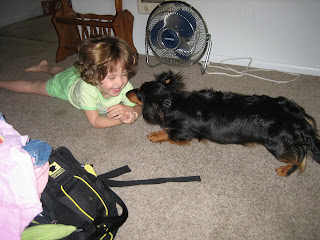 Unfortunately, the Chippy Creek fire put a damper on my astronomical designs. I'd hoped to get in some great observing and even borrowed a telescope from a really nice guy in Coeur d'Alene for that purpose. But the skies were just too smoky for any night time visibility. In fact, our first full day in town was so smoky that we stayed indoors after a quick trip to the local library. To give some impression of how bad the smoke was in the valley, check out the following pictures:

This one is of deer in the yard at dusk. Note the mountains on the other side of the valley. (That's the dark part above the trees, Midwestern readers...) 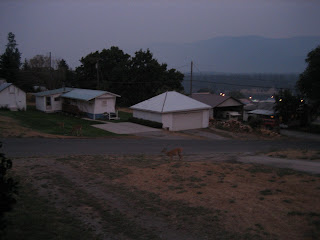 Now, here's the view from this same window when it was extra smoky. Where have all the mountains gone? Spooky. 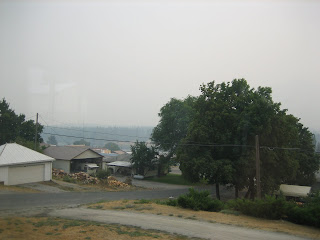 Lucky for us, the wind shifted and we lost a lot of the smoke for the rest of our visit. One day, Elise got to both practice archery with Grandpa and go kayaking with him on the reservoir. The archery lesson ended when deer wandered into the area and Elise didn't want to be close to them. The kayaking began when someone accidentally loosed about a dozen crab apples into the reservoir when they were launching their boat and Elise wanted to go pick them up. Before the apple collecting mission presented itself, Elise wanted no part of the kayak. Go figure. Maybe Grandpa will leave a comment here as to whether he ever got all of the crab apples out of his kayak. 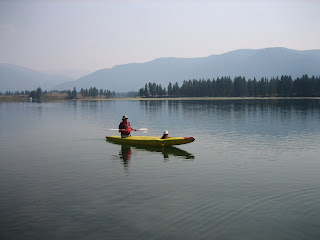 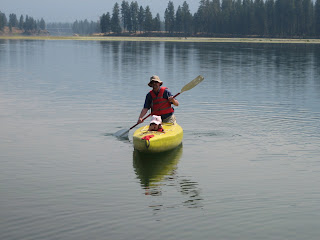 And then, before we knew it, the week was over. We spent our final night in a hotel in Coeur d'Alene in order to 1)return the borrowed telescope and 2)not have to drive a huge distance before our flights the next day. It was a wonderful, relaxing trip and I hope we get to visit again soon. Maybe not during fire season. But soon.

Some things I learned about myself on this trip:

5) I find small-town gossip to be even more fast-paced and interesting than FARK
4) I am capable of paying $9 for a peanut butter and jelly sandwich at a restaurant and waiting an hour and a half for it. But only once, and only because it had fresh strawberries sliced in it.
3) Big freight trains are even noisier than el trains, but I like the sound of them way better.
2) I can strike up a monologue at passing deer with ease, and they seem more interested in what I have to say than the people I meet on the street.
1) I really like spending time with my parents and seeing my daughter spend time with them.

I wish I'd taken more pictures on this trip. We had so much fun it was hard to remember to take out the camera. When we returned home, Andy was amazed by how much Elise had grown up. She's more confident, more dexterous, and has an even better sense of humor. It was a good vacation, and I hope we can have another one like that again soon. Thanks, Mom & Dad!

There isn't much better than a visit from your daughter and grand daughter. (she is wau cuter than yours:) I categorically deny the presence of apples in my kayak!