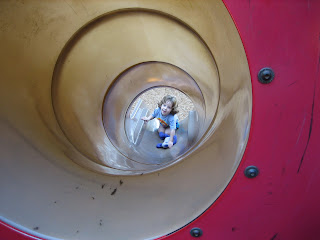 It's been a good week, Gentle Reader. The Steingruebls have been busy and having piles of fun, more or less. The weekends tend to be most exciting because we're all home, so that's the stuff of which I write. Otherwise, you're stuck reading about how many loads of laundry I've done but not folded, how often I run the dishwasher, and endless speculation about why Roomba sometimes gets hopelessly lost on its way back to its home base.

Saturday was a classic up-and-down day in the great Steingruebl tradition. Elise woke happy and fun, and she and Andy had an absolutely fantastic morning at the park. I napped. It was awesome.

Then came the afternoon, and a big birthday party. The son of one of Andy's colleagues turned 5, and Elise was thrilled to help pick and wrap the present. Unfortunately, she was tired and completely overstimulated by 2pm, and the party atmosphere didn't help matters at all. We left with much kicking and screaming before the cake was cut. Nobody was very happy. For me, it went a bit beyond frustration and into momentary blind panic because when I picked Elise up at one point, I felt a terrible gut-wrenching pain reminiscent of last summer. I'm not so tender today, but I've also been very careful to do nothing that might prove aggravating.

Following the afternoon of doom, Andy sent me off stargazing to collect myself, and it was a good move. The seeing was horrible (very misty and lots of atmospheric interference) but the company was fabulous. Larry, a guy I'd met previously, gave me some pointers on better collimation which was particularly helpful. Lou showed me the "ET cluster" which some people mistakenly call the Owl Cluster, and that was fun. Adolfo started paying attention to how to find stuff instead of just using his telescope's navigational computer. A very good night.

Then, Sunday morning, we got up a little later than intended and drove to Palo Alto to pick up Cousin Geetha. From there, we headed for Muir Woods and had a fabulous time. Whoever thought to put numbered signs along the path must have had us in mind. Elise's only motivation for continuing up the path seemed to be finding the next sign. At one point, she sprinted up the path yelling, "Run, run as fast as you can, you can't catch me I'm the gingerbread man." With it being a "designated quiet day" in the woods, this didn't go over well, but she eventually got good at reminding us to use our quiet voices. The trees were lovely, and we even saw some wildlife! One little brown bird with a long pointy beak hopped its way up the bark of one redwood. And, two deer stood about 10 feet from the path, nibbling plants. The only thing to really mar the experience was the shuttle bus ride back to the parking lot. The driver was apparently trying to keep his racing credentials current, and practicing with the bus on the winding, narrow, bumpy road. We are all slowly starting to lose that attractive green tinge we picked up. 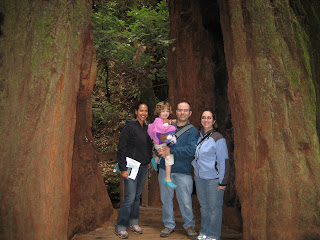 After a hearty lunch at the Dipsea, we headed over to see the Breindels before our marathon 2 hour drive back south. (It took FORTY FIVE MINUTES to clear San Francisco. And we don't go up there more often because?...)

We were tired but it felt great to be home. Elise fell asleep pretty early, and so did we. Not bad for an up and down weekend!