We've had an amazing transformation at our house this weekend. We went from diapers to underpants! Well, not collectively of course-the household adults have been potty trained for some time. But now we are pleased to announce that we're all firmly in the underpants camp.

Friday morning, Elise started our day by screaming that she wanted MOMMY to change her diaper. Of course, Mommy was happily eating cereal and drinking coffee, while Daddy was done with those things and was happy to help out. Still the carrying-on persisted. This amused neither parent. Thenceforth Mommy decreed that diapers would only be worn at naptime and bedtime.

Two changes of clothes later, Elise decided it was easier to just go use the stinkin' toilet. While public restrooms are decidedly not her thing, our girl does a great job of keeping herself clean and dry when she's out and about. It makes us so proud!

We did notice some flagging interest as the novelty wore off, so rewards/bribery were brought into play. For some unknown reason, Elise is really into gears. Yes, gears. She's been wanting gears to play with since she first saw some at an Xmas party last December. So, while we were walking through Target on a quest for more underpants and shorts we saw an extremely exciting "gear toy." Elise doesn't generally ask for things in the store, but this one she wanted. After talking it over with Mommy, Elise decided it was fair to earn the gear toy by using the potty chair. We settled on 10 stickers=gear toy. Solemn hand shaking ensued. 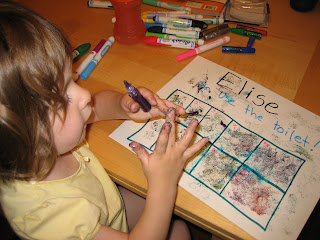 Here is Elise, creating her potty chair usage chart. Note all of the beautiful glitter glue!


And then, Elise started using the toilet all the time, with no prompting. Within 26 hours, she had the gear toy in her hot little hands. When asked how it feels to be a big kid who can use the toilet, Elise replied, "It makes me smile."

Of course, we're expecting that there will be a few setbacks but confidence is running high here, at least among the underpants-wearing set. 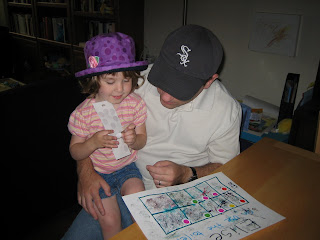 Placing the final sticker on the potty chart. Way to go, Elise!!!!!

What a big girl! We're proud of you, Elise!
Love,
Grandma Char