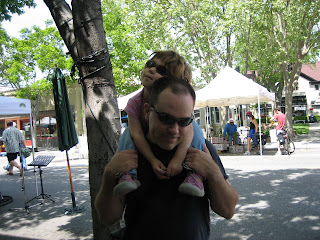 Back in ancient times, when Elise was less than a year old, we used to dread "fussy" spells and then watch for the incredible burst of ability that characterized their aftermath. We lived by a book called The Wonder Weeks, which told us that fussiness which couldn't be attributed to physical causes was most likely the result of brain development. There is a chance that we were grasping at straws, but they did seem to have an uncanny ability to predict where all of our lives were going at any given time. The book ended by saying that fussy phases would continue at ever widening intervals throughout our daughter's childhood. "Okay," we thought, "but couldn't you extend your calendar another few years? That would be helpful."

Every now and then, we've noticed that Elise has a hard time sleeping, is crabby, etc. and we imagine we're raising a crazy wild animal to be released into society when the time is right. And then the clouds lift and Elise has acquired some new talent that boggles our minds.

This week was one of those weeks. After a lot of tears, we've found the sunshine. This time, we're pretty sure she's been working on Space and Time. (As well as a killer British accent, but that's another story.) "May I please have something to eat while I'm waiting for my food to arrive?" Elise asked at lunch. (Katie Bloom's in Campbell-they have sausage rolls!!!) While playing this evening, she asked, "Where is Elmo? I just put him in here awhile ago." Elise is also quizzing us on the meaning of things like this morning, this afternoon, yesterday and tomorrow. It's going to be interesting to see if this means she will finally stop weeping every time we say we'll be doing something "a little later."

It's been a good weekend. Yesterday, we followed a friend's recommendation to Bill's for breakfast. It reminded us a lot of Le Peep in Evanston, and we'll be back often. Probably on Elise's next birthday, too, as she seemed particularly charmed by the waitstaff's exuberant but off key renditions of Happy Birthday for some of the other patrons. Also on this trip, Elise discovered that it is possible to pick up whole pancakes and dip them in syrup. That was a good one-time experiment, say Mom and Dad. 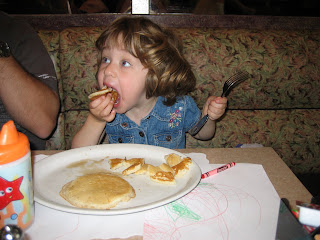 Today, we mucked about and then headed for downtown Campbell. It was fun to stumble upon a street fair/farmers' market, and we'll probably head back for this again soon. After a great lunch at Katie Bloom's we took a drive all over the place so that Elise could sleep a bit in the car to recharge her batteries. You never know what you'll find around here, but we were delighted by the giant flying purple octopus. Some days are just good. 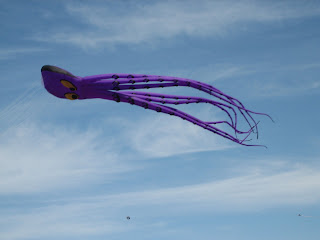 It has been brought to my attention that this "purple octopus" may well have been an appearance by the Flying Spaghetti Monster. It all just gets better and better!