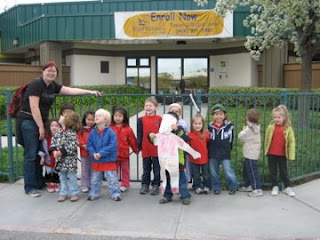 After all of the fun Elise has been having at school, it seems about time that we share some photos of the place. The majority of these pictures were taken on the day of a class field trip with Flat Stanley. He had his picture taken with the kids around downtown San Jose, and he's going to take his pictures in an envelope with him to another Bright Horizons school someplace else. (Alaska was what I last heard.)

Here they are, at the big park downtown that hosts lots of the city's big events. Hard to believe that we were in this very spot for Christmas in the Park a mere 2 1/2 months before this picture was taken. 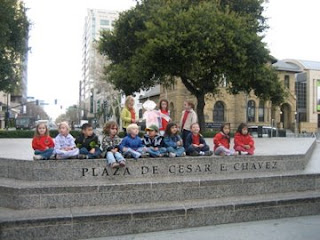 Here are Elise and her friend Katie, holding Stanley's hands outside of the Tech Museum. 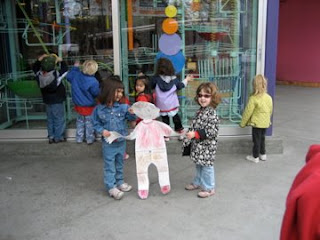 I worked pretty hard to get this shot. Where else can you see a redwood (foreground), oak (behind statue) and a Quetzalcoatl all in one place? Especially with all of those cute kids, too! One of the problems with Stanley is that he can't really stand up by himself. How's he standing right up next to that statue? As people were regretting having forgotten tape, I suggested bandaids. They worked pretty well. 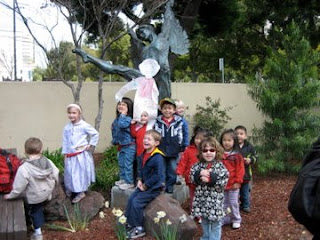 And look! We have art and palm trees here in San Jose. This is near where they set up the ice skating rink every "winter" so that people can skate under the palms. We've missed this two winters in a row, but I think this will be the year. Somebody please remind me along about Thanksgiving, would you? 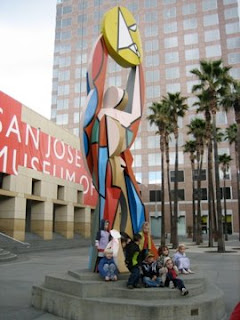 When we got back to school, I noticed that Rose (one of the teachers) was taping paper over the door to dim the room for rest time. That seemed silly to me so I volunteered to make a curtain. It turned out pretty well, and people seem to like it. One side has alphabet letters, the other has stars and crescent moons. 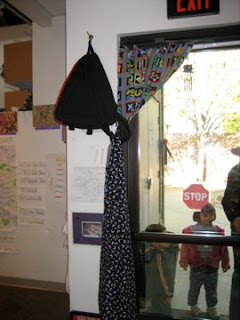 Here is the whole class with Rose. It was a fun field trip, and I hope we get to do more of them in the future! 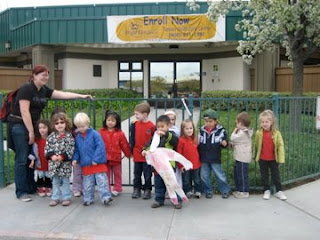