We've nearly done it for another year. Wahoo! Our one minor infraction was to watch the Sharks win game 7 of the quarterfinals on Monday. And we're intending to watch them trounce Dallas on Friday. If they lose the TV will of course have been off for the evening.

To help decrease kid screen time, Elise's school has offered programming every night this week. Monday was a family sing-along featuring all of the songs that they sing on Tuesday mornings during "community time." Elise is enamored of the song book. Of all the changes brought on by school, my favorite may well be Elise's newfound love of music and singing. She sings up a storm! And, can sometimes carry a tune. Maybe I also mentioned once before that she can match pitch when she wants to as well? It was great to finally learn some of the songs that she thinks we should know by virtue of her singing them without us every Tuesday.

Tuesday evening was science night. In honor of Earth Day, they had all kinds of cool recycled stuff with which to make collages. We're still waiting for the glue to dry to bring it home-I guess I'd better remember to get it next week. ;) We also made "rainbow stew." Cornstarch, water and I think a bit of sugar mixed with food coloring. The kids spooned red, yellow and blue goo into a ziploc. I'm used to seeing Elise be shy around adults that she doesn't know well, and kind of shrink back when something causes cognitive dissonance for her. I was therefore completely shocked to watch her look the unknown teacher in the eye and tell her that the rainbow stew was missing some colors. The teacher suggested that she smoosh the stuff in the bag and see if that helped. Elise started squeezing and then looked absolutely stunned to see more colors appearing in the bag. I congratulated her on her discovery, and she was clearly thrilled to have figured out the stew. Seeing the smile on the teacher's face as she watched Elise's face light up was just fantastic. It's a real privilege to watch my daughter in that kind of glowing, happy interaction, and I hope I will get to do so many more times.

Wednesday night was by far the best attended. I had no clue what it was about as there was not really any detail on the sign up sheet. The fact that there were soooo many names on said sign up sheet when it was first put up should have been a clue. What is this Happy Birds thing, anyway? Performing parrots! It's a family business that brings birds to events and attempts a bit of education. They clearly devote their lives to their birds-I don't think I saw a single feather out of place all night, and the birds clearly loved their "work." We saw a sun conure fly through hoops. We saw a harlequin macaw who could ride a bike and a skateboard. A cockatoo who would faint from a person's bad breath if breathed on. Another macaw who likes to stand on one foot and show off his wings. An amazon who does a fantastic car alarm impression, and another who sings. Elise's favorite of the evening was the hyacinth macaw. He's only 6, and is learning some tricks of his own. He rode a scooter and a swing, and knocked over bowling pins. He also cracked a macadamia nut with his beak.

We signed up for everything this week, but simply could not make it to the BBQ tonight. Something to do with the adults being zombies and the kiddo being overstimulated/sleep deprived. I hope you've enjoyed your Turn Off the TV Week as much as we have! And, I'll leave you with a picture taken by one of the moms who thought ahead and brought a camera... 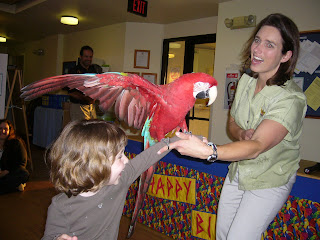 You mean there are times when she *doesn't* want to match pitch?