We've done it, faithful readers. We've officially become Californians. How did we manage to do that after all of this time? Allow me to introduce: 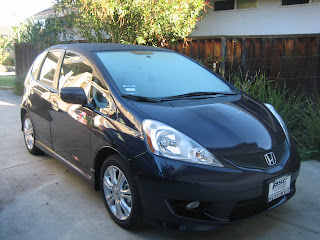 That's right. We here at Steingruebl World Enterprises now own one vehicle per licensed driver. I think that is a requirement for California citizenship.

The new car is a Honda Fit (sport model) in a fetching "blackberry pearl." It is primarily Andy's commuting vehicle. So far, the gas mileage has been impressive. Elise likes riding in it because the door handles work for her small hands (unlike the ones on our Subaru, which she can't seem to open) and it has an awesome cup holder in the door. 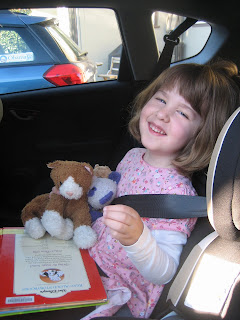 While the realities of car payments again aren't our favorites, we're enjoying some of the ease of living that a second car provides. I can get dinner ready while Andy drives himself home, which means getting the kiddo bathed and in bed before that too-tired point of no return. We can also scurry about with different purposes of a weekend, which has already proven handy. Plus, the new little car is just so doggone cute!

Of course, neither horse fits in the stable at this point as it is plumb full of junkola that we have yet to unpack/organize from the move. For the moment, though, it's kinda nice to see them both in the driveway. 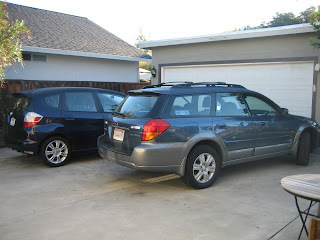 hey heather...we are thinking of getting one of those! what dealership do you recommend if you got a good deal? it's really cute!

Yay! You'll love it! It's BIG inside. And those fold flat seats just rock. Also, the hatchback is nice and low and easy to get stuff in and out of.

We got ours in Oakland. We had to travel up there because they were the only ones who had the sport model with a manual transmission.

The only dealership we dealt with that we didn't like was the one on Stevens Creek. Kinda creepy and they were marking up over MSRP last I paid attention. The one on Capitol Expressway was pretty nice and we'd have gone there if they had one with a stick.