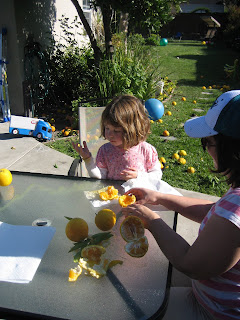 Grandpa Karl has kept us well-subscribed to a magazine called "My Big Backyard." It's all stuff aimed at Elise's age group, and exploring the great outdoors. It's been such a treat to finally have a back yard of our own where we can do some exploring.

Priority #1 has been to figure out what's going on with the orange tree. It seems to be flowering and fruiting full-time. Most of these trees take a break at some point, but considering there was a lot of over-ripe fruit when we moved in and there is a lot of green fruit now, I think we're going to be in oranges for awhile. Last weekend, I decided to harvest some of what was up there, mostly to get the decaying fruits off of the tree so that the new ones have the tree's full attention.

I made many exciting discoveries. The worst by far was that you really do have to treat ripe, juicy oranges gently or they split right open. I now know much better for next time. Along the same lines was the realization that a prudent gardener would wear gloves to pluck fallen oranges out of a rosebush. (Yes, I know, not too bright here.) Third, our garage is taller than it looks and in spite of that we really do need one of those basket-on-pole things if we're going to be effective harvesters. Finally, I discovered an abandoned bird nest. It appears to be made out of a lot of sticks and unraveled industrial carpet. I assumed it was abandoned because some enterprising critter was using it for walnut storage.

At any rate, in spite of my imprudent orange handling, we enjoyed quite a feast. I don't think I've seen Elise up to her elbows in orange juice like this in a loooooong time. I have a bowl of oranges on the counter waiting to be made into juice tomorrow morning. Yum! 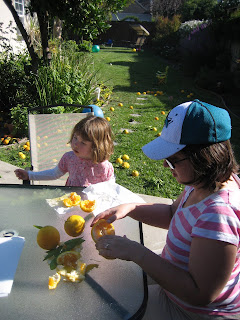 The orange tree sounds great. I really envy you.