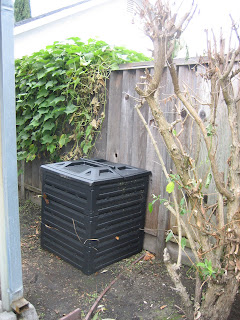 With all of this beautiful lawn and garden, I've been itching to compost. It seems so silly to throw away stuff that could easily be used to keep things healthy and gorgeous.

Happily, the City of San Jose runs a compost education program with the help of lots of volunteers. I got to attend a free class last weekend, and learned the basic ins and outs of getting stuff to rot. Being new to this, I'd like to share what I learned and also get recommendations from more experienced composters.

It is important to note that it's hard to fail at compost. Stuff eventually rots all by itself, but a clever person can speed that up and produce great stuff in as little as 2 weeks. Stuff chopped into smaller pieces rots faster. In the city, with neighbors and such, a nice person keeps the rotting stuff in bins and keeps it in balance so it's not all stinky. Compost done right doesn't smell bad.

For optimal rotting, you need a good mix of carbon, nitrogen, water and air. (At the class, I peeked at the notes of the elderly lady next to me and was thrilled to see C + N + O2 + H2O. We grow 'em good here in big city America.) All of this stuff lets microbes do their work. The instructor simplified it to browns and greens. I thought that confused the issue a bit, but it helps with the general idea.

Interestingly, coffee grounds and tea leaves count as "green" since they're initially harvested from living plants. As the COG points out, you can toss in coffee grounds complete with paper filter. And hey, that gives you a somewhat balanced addition!

A quick note about stuff that does NOT go in your compost. Add this stuff and it either doesn't break down or it smells horrid.

The booklet that came with my bin says to keep fruit an veg scraps in enclosed, rodent resistent bins. I think if you're keeping up with it you won't have rodent nests, and rats are not interested in stuff that's not fatty. I'm seeing ants discovering my bin, but they don't get comfy because I turn it regularly. If pests are an issue, sticking to yard waste (instead of food stuff), turn regularly, and you should be fine.

As mentioned above, a good compost pile doesn't smell. Nice and earthy, yes. Stinky, no. I thought my instructor gave helpful sniff-test advice. If compost is stinky, it's out of balance. The variety of stink provides clues.

Clearly, motherhood has been excellent training for compost pile maintenance.

Then, we have the air and water. Compost should say as moist as a wrung-out sponge. Too dry and the microbes don't survive, too wet and you'll get flies. Keep the hose handy!

Air is important. Not only is it necessary, but it keeps those stinky anaerobic bacteria from taking over. Piles need regular turning to keep stuff mixed up and to keep the little decomposers happy. The middle of the pile gets hottest, so a regular stir lets all of the stuff get in on the rotting. My instructor recommends every other day or so until you get sick of it, my bin's instruction book advocates once a week. I'm having so much fun watching the steam coming out of mine that I'm turning it daily. That will undoubtedly change over time. Regardless, a manure fork is your friend because it is great for tossing stuff around, and pokes great holes if you're aerating instead of turning.

Good composting really does seem to come down to personal preference. If you want to really cook stuff, it takes a cubic yard of stuff to generate temperatures above 140°F, and you have to do it in batches. A "cold" compost pile is one that you add to continuously, and it will "only" get up to around 120°F. I'm giving this "hot" compost thing a try for my first batch, but will switch to "cold" composting after this in an effort to cut down what we send to the landfill. Come spring, I'll probably make a worm bin for the fun of it. Worms don't eat much when they're cold, so I figure I'll wait to start with them until we can all be successful. Look forward to an exciting description of worm composting sometime soon.

I hope this was interesting and informative! And for those of you who have more experience with this compost stuff, please feel free to chime in with advice in the comments.

Actually, it is interesting and informative. I have to admit that my composting efforts seem pretty rough and ready compared to yours.

Over time I learned that if I built my compost pile just so I could dispense with lots of turning so I got pretty lazy about that - a plan that works best, if at all, in big, semi rural, gardens.

when the jardinier (paid for by the landlord, happily) comes to clean out our 'back 40', he said he's going to clean out the compost pile. Apparently it's been added to for years, without turning, so it's just too big and too mature to be any good. I'll begin composting as soon as that is sorted, though!

Thanks kerjillions for all the instructions...it will be put to good use, to be sure.

Now to get the leaves raked and hauled away -- there are far too many of them to ever decompose in this lifetime! (Happily the city gives out paper sacks and promises to come haul it all away for free.)

Massive heaps of compost sound scary to me. The bin I got is easy to use and keeps things tidy.

I'm glad you get to start over from scratch! One bit of advice EVERYone gives here-bag up those leaves (plastic is your friend for this) and save 'em to add to your pile throughout the year. "Browns" are notoriously hard to come by in the spring and summer, and you'll be glad to have 'em for balance!

We should all compare composting notes as time goes on and share tips. I like this rotting stuff business. :)

The only thing that could cause a problem there is whether or not I can get the leaves dried out.

Fall and winter in France are just damp -- most days it's not much more than a drizzle, but dry days are cause for celebration (and a sprint out to the clothesline!)

I think having a few garbage bags of slimy wet leaves fermenting behind the garage could be worse than not having any 'brown' stuff come spring!

By all rights we should be having rain here too, but it's going to be in the 80s and sunny the next two days at least. This of course means I could potentially feel guilty if I don't get around to collecting leaves. But I won't. ;)