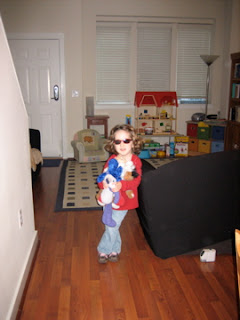 We've been doing a lot of "girly" things here of late. I'm not exactly an expert, but we sure do have fun. In case you were wondering, yes, Elise does know how cool she looks in her sunglasses.

It all started when Elise was actually willing to sit still to have her hair put in braids. Woah. 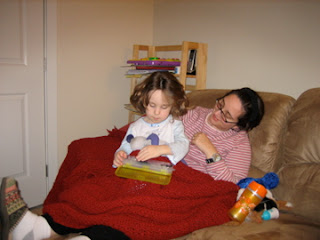 Of course, that devolved into playing with cars in unusual ways, but I'd like to mention that when she's being deliberately silly Miss Elise is oh so gentle. Hence the smile not a grimace. 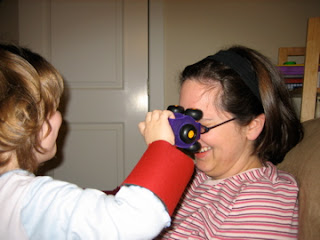 Enchanted by the nail polish I thoughtfully left out in plain view, Elise was interested in sitting for a pedicure. She thought it was a hoot when I fussed over her, bringing beverages and reading material while she waited for her toenails to dry. 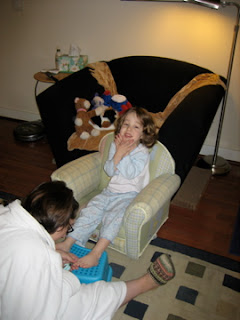 We had been growing out Elise's bangs, figuring that it couldn't look any worse than the haircuts we've found for her around here. However, she has so much thick, wavy/curly hair that barrettes were not covering it. Rather than spend $25 for the privilege of having some well-meaning person cut her hair short (thus rendering it unmanageable) I dug out my copy of How to Simply Cut Children's Hair and dug in. 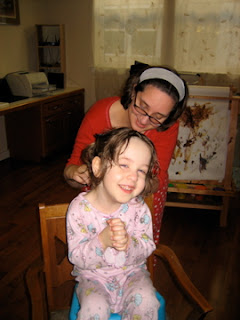 Of course, I don't have any "after" shots, but have now dug out the camera again and will be taking care of that. I left the bangs a little long and they're getting in the way already so we may be destined for another haircut shortly.

I should also mention that Elise organized her own dresser (with some supervision) and now picks out her outfits every day. Last weekend, she was so excited for her friend Liem's birthday party that she bounded out of bed when her night light turned off (her signal that it's morning) and dashed to her dresser to pick out clothes. Yesterday, she declared to me that she was not "in a brown mood." "I'm in a pink mood, today," she said. And she was-it suited her perfectly. As does her smile. :-)