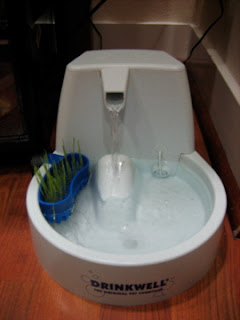 It seems the height of silliness to have wheatgrass growing in our cat's water fountain, but that's what it's come to here at Steingruebl World Enterprises.

The fountain came into play when I got tired of taking care of water dishes for two cats after Elise was born. I wanted them to have nominally clean water but didn't want to have to deal with it ever two hours. Plus, they drink more when there's running water available. Now that it's down to Flapjack (Diesel has a happy home with Arlo & Sally) I don't have to use the giant extra reservoir.

So, now that Flapjack seems to stay well hydrated, she still craves greens. I mean really craves them. She dashes out the front door to eat the grass. Normally that wouldn't be a problem, but I have no idea what the gardeners put on the grass here but I caught them spraying roundup the other day and have no desire to have that tracked into the house on little cat feet. Oh, and she also eats any flowers we bring into the house. Also probably not good if you know anything about how a lot of 'em are grown. And, the vet has pointed out to us that lilies of any sort are very very bad for kitty digestion.

While wandering around the pet store last Thursday, I came across a "grow your own" kit for Flapjack's water fountain. The little basket hangs over the side, a basket with seeds pops in, and ta-daaaaa! you have a little hydroponic operation ready to go. I got this going on Thursday, and we pretty much watched it growing this weekend.

If you're a cat, it is apparently scary. Very, very scary. Oh no! It's grass in my water dish! Flapjack has been standing in the space behind the dish and peeking her head around to the farthest corner from the grass in a vain attempt to not see it while she drinks. She has made it clear that she is NOT going to eat the grass. Even though it's conveniently right there where she slurps down her water.

Will the wheatgrass grow to be 6 feet tall before I finally have to get rid of it? Will Flapjack cave and give it a try? Would she leave less vomit for Roomba to find in the middle of the night if she did? We'll report our findings in a future installment.


UPDATE:
Flapjack has apparently overcome her fear of a grassy water dish, and has been munching with great abandon. I haven't been able to catch her in the act, but here's photographic evidence of the aftermath... 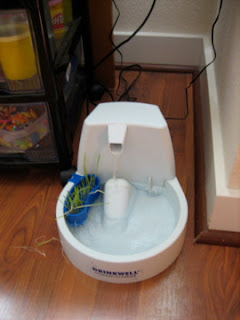 I must have one of those water fountain thingies. Saffie (rabbit) and Riz (cat) are always arguing over water rights and this could very well prevent a war. Where can I get one?

Well, here in the US they're carried by all of the finer boutiques and Petsmart. The brand is "Drinkwell" but there are others available.

Be forewarned, though, it requires regular cleaning and maintenance. Which is honestly a bit of a pill.

I am now having visions of cat and rabbit having splash fights in the fountain...