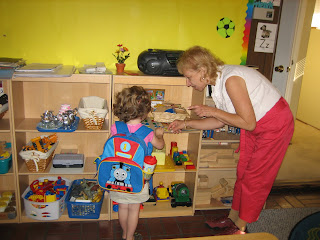 Today was Elise's first day of school. We arrived at 8:45, and got to spend some quality time with Clara (the teacher-see pictures above & below) before the rest of the students arrived. I left at 9:30, just as the kids were getting ready to go outside to play. When I checked in later in the morning, Clara told me that Elise was doing brilliantly and is "just a wonderful human being." Nothing instills confidence quite like someone appreciating the full magnitude of your kid's greatness...

I picked Elise up at noon-we're easing her into this whole school thing. When I arrived, she was sitting at the writing center with two other students, and they were all happily coloring and playing with stickers. We've been a little slow to introduce scissors here, but that didn't stop Elise from giving them a try today. She did a great job!

Tuesdays are "Be Excited About Reading" (BEAR) days at school, so each child brings in a book to share with the class. Elise's choice for her first day was "Hairy MacLary's Caterwaul Caper" by Lynley Dodd. This book was a gift from her Auntie Kiwi in Dunedin when she was born, and has been a firm favorite from the moment she laid eyes on it. Clara said that Elise clearly loved being able to share this treasure with the class, and I think it was good to have something familiar to take with her. (The gal at dooce sent her daughter to school with a Dora book and things went well. Something about books-they're just magic...)

So, school was apparently fun, and Elise is looking forward to going back again tomorrow! All of this makes me very glad, since this could easily have gone the other way. I'm sure we'll have some ups and downs as she gets used to this whole school thing, but so far it seems to be giving her some great confidence. Yay Elise! You did it big girl-your first day of school!! 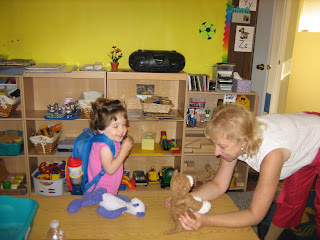 Good for Elise! Auntie Roni knows just how big and scary new schools can be for short people. All of us down here in the Southern Hemisphere had no doubts that she would handle it like a pro.

And what will Heather do with her well-earned mornings alone? Here's hoping you take some time for you, sis.