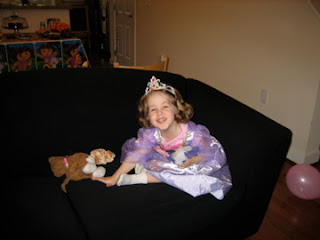 The birthday girl had been looking forward to this party for eons, and spent all morning asking if it was eleven o'clock yet. As party time approached, she insisted on putting on her new princess dress and her tiara. You may not be able to tell from the above picture, but Elise really liked being dressed up for a party in her honor.

We invited three friends and their parents, keeping to the total number of kids present to the number of years the birthday girl has under her belt. I learned this from my parents and I have to say it is a fantastic idea. Just the right amount of crazy.

One really good thing about having a party for this age group is that it takes very little to entertain them. Andy blew up a mess of balloons this morning, and the kids had a blast. Check our our girl in motion: 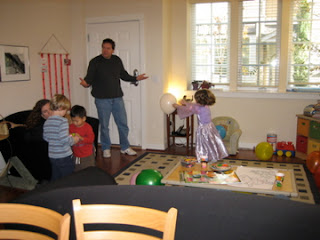 Also, having a cat when your guests don't have pets is aces, because they spend all of their time inhaling the dust bunnies under your beds while trying to lure said cat out of hiding. Kid entertainment and housecleaning all in one!

When it was time for cake, Elise was ready. She loves candles, she loves being serenaded with the happy birthday song. 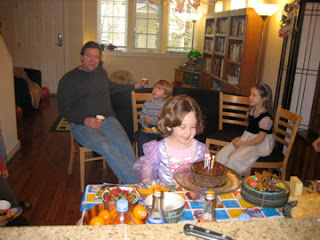 And here she is, telling us her birthday wish. "I wish that I will grow up to be big." 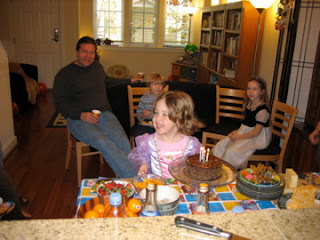 Our favorite parts were watching the kids chase balloons, and watching the giant smile on Elise's face as we all sang to her. It's possible that Elise loved every single minute of the party. She kept hollering, "This is so fun!" and "This is such a great party!"