We here at Steingruebl World Enterprises would like to extend our heartiest holiday greetings. Even this guy. He's feeling generous because of the new "grinchy-claus hat and coat" I knit for him this year. 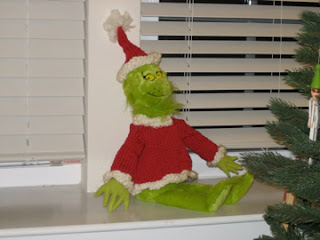 It's a longstanding tradition here that we don't travel at Christmas. Too much stress, too many logistics, and too much opportunity for offending our families. We figure that by staying home, we offend everyone equally, and we can get away with spending the entire day in our jammies.

This has helped us get a good start on all of our tradition-making, which is fun. For example, there is the annual Christmas Eve making of cookies for Santa, as done by Elise and her daddy. 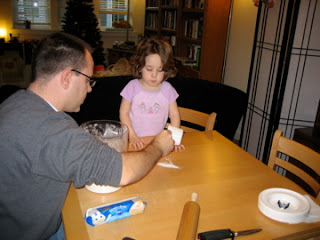 (And yes, this year we opted not to do things from scratch.) 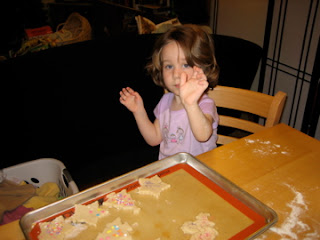 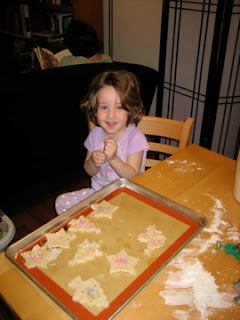 With the cookie baking firmly in hand, we got a very excited girl up to bed, and she even managed to fall asleep and to sleep until about 6:30am, which was nothing short of amazing given how very excited she was. It's a good thing she slept so well, because while she was zonked out Flapjack helped Santa do this: 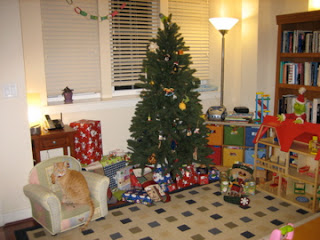 Arriving downstairs this morning, Elise made a beeline for the giant dollhouse saying, "Wow!" and then promptly burst into tears. She was extremely worried that Santa had completely ignored her list, and she was heartbroken. We talked about it for a bit and then she noticed that Santa had also brought some wrapped presents. Peace was restored. 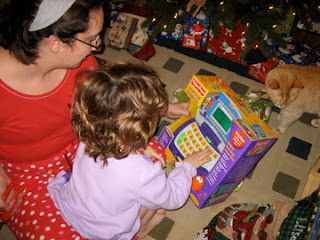 Until she realized that Santa had only brought the computer and not the Diego puppet she'd requested. Luckily, Santa put playdoh in the stocking, which pretty well distracted Elise for the rest of the morning. She kept wanting to go play with it instead of opening more presents. 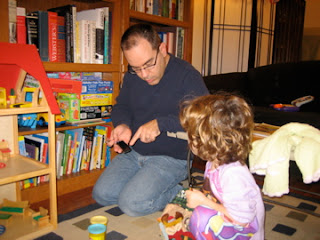 This is somewhat of a foreign concept to the grownups here at the household. Back in our day, we tore into paper and opened everything all at once before pausing to play. Elise has always been the one to appreciate each item fully before moving on to the next thing. Which is fantastic, but it does mean that the chaos of gift unwrapping lasts longer than I ever thought was imaginable. Next year, I think we'll try to be a little more sensitive to the pace she wants to set, because I suspect it will keep her from getting quite so overwhelmed. 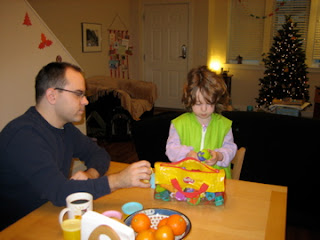 It was really good to finally break into the playdoh. 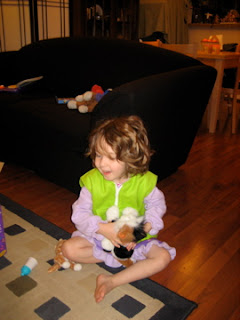 It was also very fun to discover the joys of her new kitten who kneads her claws when you pet her or feed her. This new (as yet unnamed) cat joins the posse of stuffed animals that now must go with Elise everywhere. We are now up to Teri, The Kitten, Flapjack Junior, Pukeko (a NZ bird who was a birthday present from Uncle Peter & Auntie Roni) and this meowing purring wonder. I anticipate some carrying-on come school on Thursday...

The rest of the day was a blurr. We had french toast and sausage for breakfast. We also learned that Elise can chug orange juice. Somewhat of a novelty because she usually doesn't like juice of any sort. Then, we played with toys. Nonstop. All day.

A high point for me was when we took the glow-in-the-dark stars Santa brought and worked together to put them on Elise's bedroom ceiling in various constellation patterns. We managed the big and little dippers, the summer triangle (with Alberio), Cassiopeia, Delphinus, Pegasus and most of Orion. Elise was so helpful, and tonight she was just blown away by the stars on her ceiling. I may have to relocate Cassiopeia a little, but otherwise it's a pretty decent representation if I do say so myself.

As the day wore on, Elise's attention span got shorter and shorter, to the point that she couldn't concentrate for more than about 2 minutes on anything. And then it was time for dinner. Elise actually ate ham, broccoli and a roll, and seemed to enjoy it. It took less than 20 minutes for her to fall asleep at bedtime, which wasn't surprising given how hard she played all day. We reflected that she hadn't stopped talking for so much as 30 seconds all day.

So, that was our Christmas. It was wonderful, relaxed, fun, and exhausting all at once. I have no idea what I'm doing up at 11pm finishing up this post. Well, that's not true. I want to remember this day because it's been fantastic. We hope your Christmas has been fantastic as well. 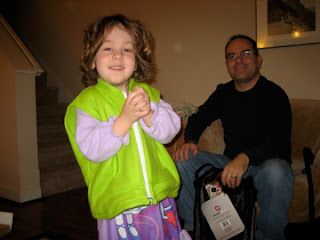 Merry Xmas to you and your's, as well! It sound like it was everything it should have been. One thing I do miss about the holiday is watching kids in the morning and how the experience changes them for the rest of the day. For example, they may be more or less talkative, or wear new and provocative combinations of sleepwear and outdoor gear.

What did Santa bring Andy and Heather, by the way?

Good to hear that you were able to enjoy food, fun and family all day long. Thanks for the pics, too. They're fantastic!