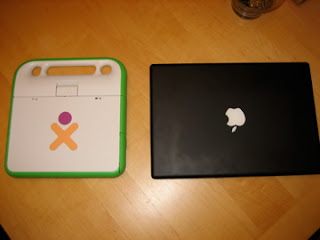 Amidst the holiday hoopla, the "get one" portion of the "give one, get one" OLPC promotion arrived. (It's the cute little green and white one on the left, next to my Macbook for size comparison.) I've actually not been all that interested in this project, but my brother is. And, since the promotion was only good in the US, we've got this little unit in our clutches and will send it off to Uncle Peter as soon as we've played with it and blogged about it thoroughly.

Fresh From the Box

For starters, this little machine is adorable. I mean, look at the colorful little person on the cover. And that bright green and white just screams "play with me!" In fact, it is so cute that Elise had been begging us to take it out and play with it since it arrived. It was the first thing she wanted to muck with this morning.

We opted to just plug it in and will save battery testing for someone else, but again the attractive green cord is lovely and highly visible. I don't think we'll be tripping over it any time soon.

I had to look at the diagram as to how to open the thing up, which was mildly distressing for me. I mean, I play with technotoys often enough that I should have been able to figure it out, right?! That accomplished, I liked that the screen has some semi-hard stops to hold it in position with frequent use. A little stiff at first, but I think it's well designed for its intended purpose. The keyboard is tiny and also cute. I like that it's all enclosed and covered with that green squooshy stuff. Elise wanted to push the buttons slightly harder than needed as they do feel a little uncertain at first. Nobody will be breaking any speed typing on this, but since that's not really the point I figure that's OK.

The touch pad has a durable feel to it. Elise had no trouble using it, if four-year-old computer skills are any measure. I am slightly disappointed by the small size of the buttons for clicking, but maybe that will just encourage kids to learn the keyboard shortcuts.

The other main physical appearance/feel thing that bears mentioning is that the unit is top-heavy without the battery. Sitting on the sofa with it on my lap, I felt I was in constant danger of dropping it. I think this would not be a problem with the battery installed and use on a flat surface, but it's something to be aware of.

The OLPC takes about the same amount of time to boot up as my Macbook, so glean from that what you will. It was fun for Elise to type her name and then click the little person to choose what colors to be. Very cute. And nice that there can be several profiles on one machine without much difficulty.

We're still learning how to navigate around, but the applications we tried were fun. Elise liked the drawing program and the TamTamJam program as well. I suspect that as I fiddle and learn how to use these applications, she will get more out of them. She was annoyed that the cool snake icon took her to an opportunity to try some programming. But then, age four is hardly the target audience. Turning the machine off after we were done was a little non-intuitive, but I think we managed it okay.

So, those are our initial impressions of this little unit. Cute machine, ambitious project. Glad to have a chance to play with it! 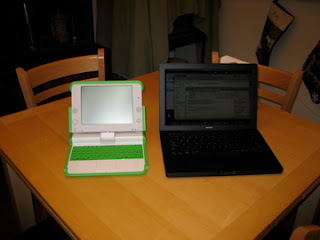 Wahoo! That's pretty neato. Thanks for the review. I wondered if the laptop might be a bit top-heavy in general given the guts of it being up top.

Have you tried the screen in full sun with the backlight turned all the way down? It's supposed to be super hi-res and grayscale in that mode.

Hmmm...I have not. I guess the next thing we'll do is get that battery charged up and head outside!

I read somewhere that the battery may come charged, in which case, please do use the battery! It's supposed to be able to be power cycled lots of times. I'm starting to read the reviews on reddit. Very exciting.