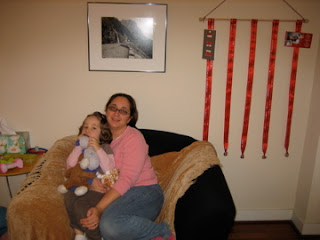 Elise and Mommy, ready for Elise's first day at her new school. As you can see, she's a little apprehensive. Teri Bear's ear doesn't make it into Elise's mouth unless she's pretty worried, or falling asleep.

As it turns out, school was good. I had to spend some time with paperwork and parking and other such things, so she was on her own for a little bit, had me with her a little bit, and then spent the rest of the day at school on her own. She did a great job.

One thing I noticed was that Elise did a much better job of following directions when I wasn't nearby. She's normally pretty good at following directions, but school is a different story altogether. She seems to really need a personal invitation, and her previous teacher wasn't interested in doing that. So, when I watched Elise space out and put Teri Bear's ear in her mouth when she was asked to join a line, I was pretty nervous.

Well, talking with Linda (Elise's teacher) after school, I was relieved. Yes, Elise had needed personal invitations to follow directions. But unlike our previous school experience, the teacher continued to say that Elise didn't seem to be defiant. She needs to feel comfortable and safe about what's going on and then she's fine.

Can you hear that sigh of relief? I have a lot of confidence that this new school is going to work out.