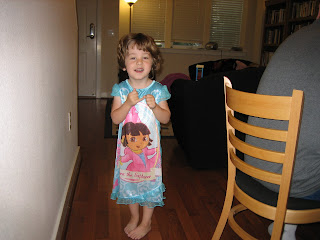 Sometimes, it's hard to be a kid. Grownups lose sight of that every now and then, I think. Last night, Elise had an experience that sent me back somewhere between a quarter century and three decades.

It was about 10pm, Andy was off at work to do an evening's work because I inadvertently broke the interweb here at home by plugging it in wrong. (Convoluted story, not relevant so omitted here.) Elise woke up screaming in pain, and I dashed upstiars to find out how velociraptors had managed to get into her bedroom all the way from Kentucky.

When she stopped sobbing long enough to get some words out, Elise told me that her knee hurt. "Oh no!" I thought, "she's dislocated her knee!" Hmmm, no. Growing alarmed by the renewed shrieking every time Elise moved her leg, I called Andy at work.

Probably a leg cramp, he surmised. I contend that I probably could have figured this out too under different conditions. Like if it had not been past my bedtime, and I hadn't just spent 20 minutes with an unconsolable child in my arms.

Leg cramp. Man, I haven't had one of those in eons. But I remember waking up with them as a kid. They felt like my whole leg was trying to turn itself inside out. And it could take a good long while for them to go away, too. Last night, it took some tylenol and about 15 minutes of gentle massage, plus one good library book to return things to normal. Now we're free to wonder if she'll have enough of these to recognize it in a few decades.

In the mean time, smiles ruled the morning as she modeled her fancy new nightgown. Awwwwww...

I remember getting those. A lot. Into my teen years, even. I remember spending an hour on one particular Christmas morning crying quietly in my bedroom, alone, because it hurt so bad and I didn't feel like I could sit at the breakfast table without crying. No one likes a downer on Christmas. Thankfully I had a really gread Dad who notices his youngest daughter was missing from the table, and came to the rescue with one of his signature leg rubs.

To Elise from Auntie Roni: leg cramps suck, so thank Mommy or Daddy profusely for the leg rubs-they're the only thing that really work.