The Tooth Fairy has Arrived

Yes indeed, folks, the Tooth Fairy herself has visited us here at Steingruebl World Enterprises.

At school on Thursday (Oct 2, 2008. Mark your calendars, people!) Elise was bored at naptime and resorted to wiggling her insanely wiggly tooth. Wonder of wonders, it popped out. When I arrived to pick her up, I was greeted by the biggest ever gap-toothed grin and a shriek of "Mommy! My tooth came out!!!" So exciting. I was also informed by Elise's teacher that getting her to put said tooth into an envelope was like...something akin to pulling teeth.

We made much of the tooth and the proud big kid was willing to show off her new smile. 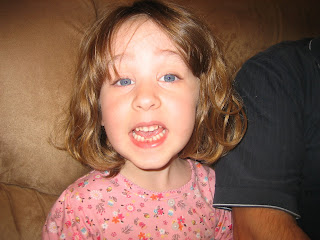 It took awhile for Elise to fall asleep, but once she did the TF penned a little note and tied a sparkly ring to it with a length of dental floss. Awwwww. "The Tooth Fairy took some of your dental floss, Mommy," said a disappointed girl. "I don't think she'd do that, Sweetie. It looks like she and I use the exact same kind. How cool is that?!" I get the feeling there is something Elise isn't saying about the TF, something that's gnawing at her. Hopefully, we'll figure out what it is soon.

And hey, the good ol' TF gets another shot at it tonight! Elise's front teeth are coming in like crazy, and she had a second very loose one on the bottom. This morning, after running straight at me and crashing like a wave against the cliffs of Dover (one of her favorite things to do lately), she made a funny face and asked if we could go brush her teeth. Sure! Why not. She then complained that her tooth was "irritating" her, so we sat on the sofa to take a look. Good thing Daddy isn't squeamish about teeth. He took one look and said, "Woah! Did that just fall out? If not, I think you could just grab it and it would fall right out." Turns out, Father really does know best. Wow was Elise proud to have extracted a second tooth in as many days!

We spent a lot of time today talking about how very surprised the Tooth Fairy will be to have to come to our house for a second night in a row. That may well be the best part of it all. Hopefully, those top front teeth will hold off for a little while yet and let the TF catch her breath.

What a great milestone for our girl. After getting her teeth early, it's not a huge surprise that she's losing them so early as well. We're all in love with her big, beautiful new grown-up teeth. Wahoo, Elise!

Oh, and now she wants to know what the TF does with all of the teeth she collects. No clue. Luckily, she forgot to get me to help her write that question in a note for tonight, so we have time. Anybody have suggestions? The Tooth Fairy would actually really like to know...

I've been thinking about this spare tooth question for some time, the way I see it you've got some options:

1. Fashion them into some sort of jewelry to be given to Elise on her 16th birthday.

2. Collect teeth from all the neighborhood children and make a toothy mosiac.

3. Instill a healthy fear of soda in Elise by showing her exactly what Mountain Dew does to a tooth soaked in that powerful solution.

4. Install it as an exhibition piece in a "museum of wiggly things." Tell Elise that if she doesn't sit still, she may fall off the surface of the Earth, much like the tooth from her mouth.

5. Donate it to the local dentist who can use it for tooth transplants.

6. Answer the age-old question: "Will it blend?

Peter may want to become a parent--most of those ideas kind of scare me.

I always wanted to keep my teeth to make into jewelry. However, that needs to be done soon. When, 20+ years after the fact, I found the box of teeth and a couple of finger/toenails (that I lost whole for various painful reasons), they were all in less than jewel condition. The teeth all cracked on touch and the nails were curled and crackly. One book I have read (to school kids) says that in some places--mostly Central or South America--mothers do have at least the first two teeth gold plated and made into earrings.

I like the idea of the TF putting the teeth to a good use. One story I have read suggests that she builds a house of some sort for needy teeth and/or other things that are no longer needed on earth. Perhaps she keeps them for false teeth. Maybe she grinds them for fertilizer. Many cultures bury their teeth so that the tooth will grow in straight. Maybe teeth are just ground up to make fairy dust.

Fairies tend to be greedy, despite their offers to come and grant your wishes. I don't think that the tooth will really be put to any good use at all. Probably she is just a chronic hoarder and they decorate her personal abode.

Any way you cut it, having a little flying woman break into your bedroom at night to take away your bodily detritus, and then reward you for a job well done at the molecular level, is a little creepy.

If Elise asks, you can tell her that the Tooth Fairy is on Santa Claus's payroll. She collects teeth from good little girl and boys, does a little snooping to make sure that they are behaving themselves, and then she flies back to the North Pole to add more data to Santa's Child Tracker database. He uses these dental records to keep tabs on naughty children who only eat half of their dinners and then throw the rest away. You can tell a lot from a half-eaten broccoli floret, you know.

My father always told us that Santa Claus was just like the devil--it's your father. This conspiracy theory gets creepier and creepier.

So much conspiracy, so little time. Doggone it, I'm going to have to prepare her mind to accept such explanations...

After a friend of my son (5 y o) lost his first tooth Son announced "The tooth fairy's not really real." And that was it. I asked if he'd heard that from someone? No, he'd decided.
Good boy! However, I've given him the option of playing along with the TF if he wants to. (Just like we can with Father Xmas when that time comes too).

BTW, hello to Steingruebl World Enterprises - I got here via the Belgian Atheist ;~)

Your kiddo sounds like a sharp one. :) I like seeing how kids deal with adult subterfuge. Mine, thus far, has zero respect for authority unless it benefits her directly, in which case she'll play along with just about anything. I ~think~ it's just the age, but we're working on it all the same.