What's there to Debate?

We watched Joe Biden and Sarah Palin. He was nice enough to stand there and not laugh at her which I think deserved extra-credit points. I can say that if this version of Sarah Palin had been on my high school debate team, I'd have been the coach's favorite in spite of the fact that I skipped meets for family funerals and the occasional band performance.

A few people have pointed me to an absolutely brilliant flow chart of this particular debate. Head over to The Daily Kos to see it in all of its original glory! 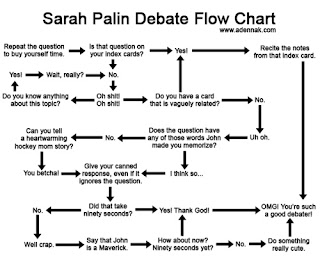 And then bear in mind that as much as this lady might be good at a number of things, she's not vice presidential material. And FSM forbid McCain kicks the bucket (what with running for president being his bucket list and all) and leaves her minding the store. George the clueless clown puppet has nothing on what Palin could be. By all means respect her as a human being, but my oh my don't imagine for a minute she'd be anything other than a disaster as VP.

The flow chart really nails it! I can respect Sarah as a human being but her nomination as vice president greatly diminishes my respect for Republicans as a political party. (Maybe not as a bachelor party;) MOre than anything her nomination erases the once considerable respect I had for John McCain as a leader who claims to only be putting the country first.

If nothing else, it's a cynical move meant to give the people what someone thinks we want. We have the circus, now we just have to demand bread to go with it...