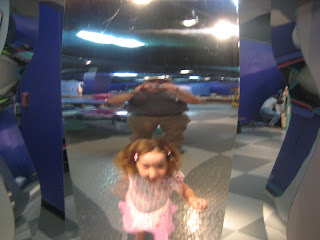 We here at Steingruebl World Enterprises have been a little too preoccupied with some change of our own to focus much on the kind they're talking about in Denver these days. We'll get with it (eventually) and say something substantive (or vapid) about it. In the mean time, we're focusing on preschool transitions and moving.

One thing we're starting to understand is that it's pretty easy to rock Elise's world. For example, she is staying at preschool for another year even as most of her class "graduated" to kindergarten. This, right by itself, is hard for any kid. Add to this the tendency of Elise's teachers to keep order by asking the kindergarten-bound to prove they're ready for kindergarten by following directions, and you've got one miserable little kid. Because, you see, if being good means you're ready for kindergarten and you're not going to kindergarten, you must not be good. To her mind, Elise couldn't win for losing. I didn't learn this directly. Nope. A sudden flurry of accidents, irritability and downright defiant behavior. Finally, I overheard Elise playing with dolls and telling them to prove they were ready for kindergarten by being quiet. Oh dear. We spent a lot of time talking about that and I think (read: hope) that as long as we keep talking about it Elise will regain some confidence in her wonderfulness.

Moving is hard. Elise has been asking a lot of weird questions about what stuff we're bringing and what has to stay here, and we've been going nuts trying to figure out how to reassure her that she'll have all of her "stuff" at the new place. When in doubt, ask a professional. I had a conference with Elise's teacher this morning, and she had some fantastic ideas. Not only did she do some excellent research on helping kids with change, but she had some great recommendations of her own. I love knowing that Elise is under the care of such a sharp lady two days a week. :)

My favorite take-away from this meeting was a suggestion that we have Elise go around and tag stuff so that she knows what we're taking. A physical act, something concrete to work out some of that worry. I got a package of small post-it notes in 4 different colors, which Elise discovered after school. After we talked about what they were for, she wanted to get going right away. We made a key, and she chose which colors mean what. So, if you happen to visit us sometime in the next month, here's the scoop. Things tagged with purple will be carried by the movers. Pink tags mean we'll move the item. Blue is for garage sale items. Yellow is for things we're not taking.

I learned a few interesting things from this exercise. For starters, Elise was itching to do something helpful. Second, she had some genuine confusion about what was coming with us. I asked what color she wanted to put on her bed, and she got very quiet and avoided eye contact. Finally she looked at me sadly and said that the bed would have to stay so we'd better get a yellow tag. Oh no! I explained that the bed was hers and of course it would come because otherwise where would she sleep?! From there, I insisted on yellow tagging everything that needed it. So there are now yellow tags on toilets, sinks, counters, major appliances etc. We were finally able to joke with her about whether or not to take the front door. I think we have a handle on this thing now.

So, I don't know if this is change we can believe in, but it's a pretty good start.

I love the tags. Brilliant. All kids do want to help and I am sure she will be helper numero uno when you unpack as well.

I hope you mentioned to her teacher her other problems with equating being good with getting to go to kindergarten. (And could someone tell some of the kindergarten kids here about the advantages of being good.)

May your changes in September go well and trickle over to affect changes that come in November and January. May they all be good and productive for you, the nation, and the world.

Say, Amen or something of that nature.