My grandfather Ralph always used to tell stories about when he was a kid in school. A particular point of pride for him was the way his teacher appreciated all of his hard work in class. One day, she sent a note home to his mother reading,

"Dear Mrs. Schmiedeskamp,
Ralph is the most trying boy I know."

Today, more than any other in recent memory, I am sure that Elise has inherited some of the finer traits of her ancestors. Or maybe today was opposite day and nobody told me. This kid woke up CRANKY. And she stayed that way.

The only time I had a minute's peace was when I was doing exactly what she wanted me to do. Te rest of the time, she was a little tyrant. I've never heard so much "why"ing and foot-stomping in a twelve hour period! My favorite is the ever popular, "Mooooommyyyyyyyy! Quit. Telling. Me. What. To. Dooooooooooo!"

In the past, a day like this would have killed me. Today I just feel like I've been hit by a garbage truck. This was messy and unhappy and full of frustration, but I feel like I did well. I didn't give in and take orders from my kid. I responded promptly and firmly to misbehavior and kept every promise I made. And it worked some.

Of course, this is the second night in a row that Elise has thrown a gigantic tantrum at the prospect of eating what I've cooked for dinner. This is the second night she's refused to eat and gone to bed without supper. We're assuming she will eventually get hungry enough to eat things she's liked perfectly well in the past in spite of the fact that we're all sitting at the table together.

I've taken this all in stride and am resolved to keep this kid busy helping me tomorrow playing quietly in her room. We're gonna be fine. It was just a very draining day.

The worst part of the day came when Elise tried to close my hand in the crisper drawer of the fridge because she did NOT want an apple for a snack. I said something to the effect of, "Oh no you don't, young lady. Time out!" That part was cool. The uncool part was that I attempted to pick Herself up off the floor and deliver her to the time-out place. Something wrenched, and now I'm back to faint echoes of the pain that so clouded summer 2006. Aside from hurting, it throws me back to the weeks and weeks when I was incapacitated and miserable. I have sworn to myself that I will never do anything to incite that kind of agony again, and here I go doing it in a test of wills with my progeny. Argh.

On the bright side, we met a friend for a mommy & me movie this afternoon. I am not a fan of "kid" movies because they are almost always full of themes that are not appropriate for the small fry, but I LIKED Bee Movie. It was funny for both of us, the stuff that was over Elise's head was not crass or violent, and we learned a lot about honey bees.

Tonight was my turn to escape. I indulged in a bit of retail therapy. It was a blast! Of course, this can't be a habit but it was a welcome break today. I needed to pick up some buttons at the fabric store, and while I was there I noticed that the "fall" decorative stuff was all 60% off. Apparently, right after Halloween is Christmas, and forget about turkeys and stuff. So, in a fit of home-making craftiness I present to you, gentle reader, my new wreath that I made out of my own head with nuts to spare. 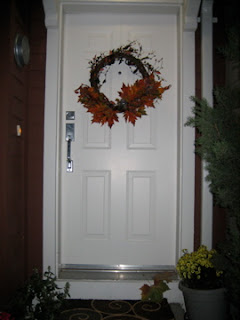 The eating issue reminds me of years ago when your family came to visit ours--probably when you were living in Rochester. Peter would get up and wander during meals, an activity that did not exactly please your mother. The first time he did that at our house, Geetha just finished her food and deftly moved to Peter's plate for her second helping. I don't think Peter left the table again for the rest of his visit. Do you want to borrow Geetha so she can just snarf up Elise's uneaten delights?

Haha! Thanks for the great story, Auntie Linda! I think I was probably too young to remember that story, but it does sound like it would have been a highly effective motivator.

Heh heh-I mostly ignored Peter's table habits when we were kids. He was such a show-off, what with his eating what he was served and asking for more and all.

I think Geetha has been corrupted by society since her early youth because I haven't seen her snatch food off of anyone's plate lately. What has happened to you, cousin?!