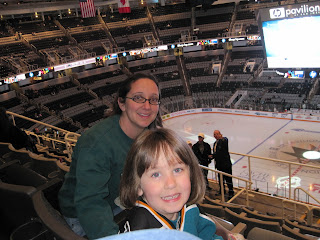 Elise has been desperate to get to a Sharks game this season, and I "finally" obliged for the 7th home game of the season. (Man, they've been on the road a lot!) With Andy out of town most of the week, and two days off of school in the middle of the week besides, it seemed like the thing to do.

And was it ever! I love going to the Pavilion with Elise. She really gets into the roar of the crowd, the cheering, and the junk food. Now that I think of it, maybe we'll have to cut back on the junk food part of the experience. At any rate, we had some serious fun.

We started with a little pre-game show at home. Note how Elise is standing next to her new favorite player, #41 Jed Ortmeyer: 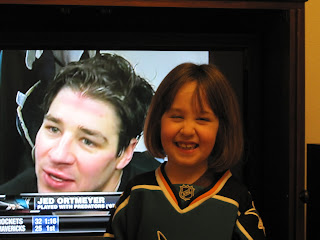 We also got a pic of her with Brody Brazil, but that was an accident and will not be posted publicly unless the guy stops acting like such a gung-ho nitwit during the broadcasts.

Game-wise, the pertinent facts are these:
The Sharks played the Nashville Predators, and whumped them 4-3 in what seemed a strangely lackluster and sloppy performance from where we were sitting. It was great to see Devin Setoguchi (#16) back on the ice after an injury. We got to see Greiss between the posts, and wow does he give some confidence.


Here is one happy kiddo before the start of the game: 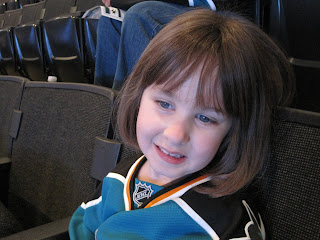 No, honestly, she's overjoyed but getting sick of Mom trying to get a decent pic and would like me to put the camera down already so we can get all excited and start eating hot dogs.

*****
Holy moly-I started this post a virtual lifetime ago, and now have completely lost my train of thought. Hmmmmm... I think I'll throw some pictures on this baby and call it a day. Go Sharks!

I have the cutest granddaughter on earth.