It was a beautiful Mother's Day here, and we hope it was where you are, too. Andy and Elise let me sleep in this morning, which was a treat in and of itself given that our girl has taken to getting up around 6am. After a nice lie-in, I was greeted with a "Happy Mother's Day, Mommy!" followed by Andy carrying a big tray laden with a scrumptious breakfast. Complete with a rose freshly cut from the garden. Major style points for that one.

Breakfast was pancakes with homemade blueberry syrup, veggie sausage, apple cinnamon muffin, Ranier cherries AND coffee in the special mug Elise made for my birthday. (Look, it says "Mom" on the bottom. No way-it says "woW!" No it doesn't!) Tucked under the plate was a book all about falcons, my newest obsession. What a beautiful treat. To top it all off, at the end of the meal Andy presented me with the nutrition information for everything so that it would be easy to count for my Weight Watchers points. I was in high fiber, low fat heaven.

When Andy and Elise were out and about yesterday, I suggested that they look for a bird house kit that Elise could put together. The houses looked a little complicated, but they found a perfect little feeder. After breakfast, we headed outside to build! This kit was nice because it had holes started for the nails and very simple instructions. Elise was awesome with the wood glue, and liked using the hammer. Some of the nails were tough to pound, but she stuck with it and got them all in. It was beautiful to see the look of satisfaction on her face when she realized she had done it all on her own.

And, since this was a kit for kids age 5 and up, they included paint! Behold- 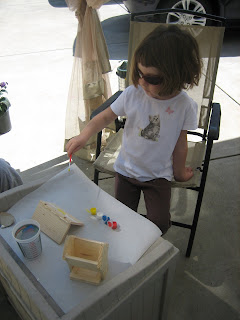 And here is the finished product, as seen from outside: 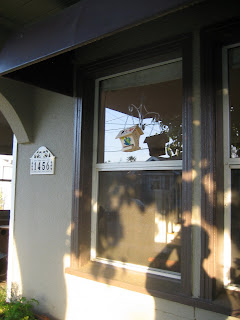 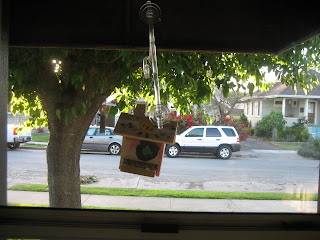 I suppose one could ask for a better Mother's Day than this, but I'm not sure how it could possibly be delivered.

The running theme around here these days appears to be loose and missing teeth. Elise is hilarious without her top two front teeth. She's got just the tiniest bit of a lisp. Today, she lost one of her bottom teeth. That makes FIVE teeth for this five-year-old.

Loyal readers will doubtless be shocked, shocked I tell you, to learn that our girl is a bit of a smartypants. We, of course, have no idea how she got this way. Before she went to bed, Elise wanted to write a note to the Tooth Fairy. I hope she doesn't wake Elise with uproarious laughter when she reads this: 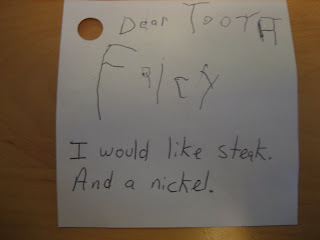 And the back of the note: 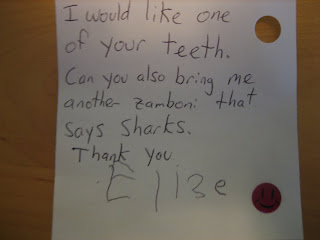 Mostly, Elise likes the idea of saying silly things. But I think a little part of her also figures that if the Tooth Fairy is going to the effort to bring her something, the least she can do is thank her with a good laugh.

Five years of motherhood and I'm always amazed. Thank you, my wonderful husband and daughter.

That note to the tooth fairy actually made me laugh out loud - she has your quirky sense of humor. Happy Mum's Day, sis! Sounds like it was a good one.