Howdy, sports fans! We here at Steingruebl World Enterprises have got a serious case of hockey fever. Don't worry, it's highly contagious and completely normal around playoff time. We've discovered that it's a chronic condition. You've been warned.

First off, I'd like to announce that Elise had her first pre-hockey class on Wednesday afternoon. Andy ditched work early and met us at the rink. A nice lady helped me get Elise's skates on just right, and then ended up being Elise's teacher! Here is our girl, ready to get out on the ice: 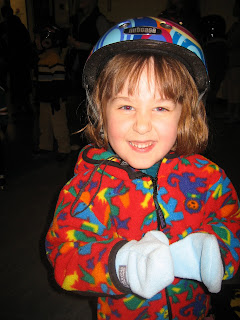 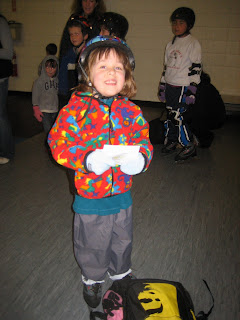 For those of you who, like us, have never been to skating classes before, the system by which they sort out the class groups is clever and fun to watch. They get the more experienced skaters out there first, and then instructors get stacks of buckets for the newbies to hold on to, and take them out on the ice. Once everyone is there, they do a few little exercises to sort of sort out both skill and apprehension levels. The kids who have never skated before but are willing to try moving around a bit go in one group, the ones who stay rooted and frozen and (in some notable cases) crying for their mothers are in another. It works well for everyone except maybe the teacher who has a dozen immobile and thoroughly terrified little people with whom to contend. I thought Elise's teacher was really good. She also did a great job of getting Elise fired up for next week, which I loved.

Then, the big surprise of the week was that we secured a spot at a session of "Girls Only-Give Hockey a Try." Pretty good, considering that when we signed up there was a hefty waiting list. This program allows girls aged 5-12 to gear up and spend an hour, well, giving hockey a try. And, it's free. Which is a good thing when you start thinking about the cost of the gear. In theory, this is a great program. In execution, it is a phenomenal program. I had not expected to see so many of the Jr Sharks Girls there, but they turned out in force to help with the gear and to mentor the new girls. Their parents were amazing, and one mom spent a vast portion of the morning introducing Elise to the big kids and helping her get comfortable. And then, there was the alumna who dedicated her morning to Elise. She is my new personal hero, and you'll see why as this story continues.

When we arrived, Elise was assigned a giant bag with all of the necessary gear. We headed for the locker room with Kelly, who showed us the ins and outs of dressing for hockey. 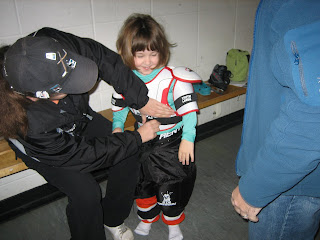 When Elise was mostly suited up, Cori came through and helped us get skates on and laced up properly. 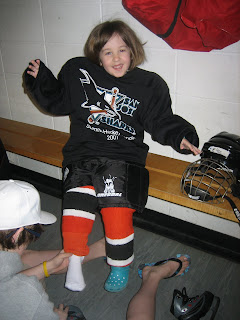 It was then determined that the gear felt "funny" and we slowed down a bit and got the helmet on. Not so sure about the helmet... 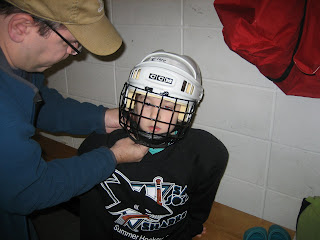 All geared up and ready to go! 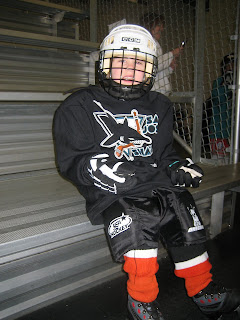 This was the point at which the tears began to flow. The gear felt funny, the ice looked scary, etc. A thoroughly wonderful mom of one of the big girls (age 7!) sat with us and talked all about hockey and the wonder of all that padding and insulation.

Still unconvinced, Elise was determined to sit on the bleachers and not get near the ice. Then, Cori arrived. And Elise let her carry her out on the ice and skate with her in her arms. They came back for a bucket to sit on and be pushed. They came back for a stack of buckets for Elise to push. Elise didn't want to go back out, until she asked Cori about the penalty box.

All of the earlier resistance disappeared when Cori told Elise about just how much time she's spent in that very box. They skated across to the box, and spent a few minutes pretending that Elise had got a penalty. My truly amazing camera work shows them waaaaaaay across the ice. Now, in regular skating class, the teachers want kids to let go of their buckets so they get them to drum on them and do head and shoulders touches. Elise wanted none of that, but had no problem letting go of the bucket with one hand in order to to "rough" Cori and try to draw a penalty.

When Elise got tired of skating, Cori sat her on a bucket and they worked on stick handling. 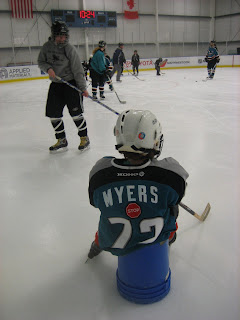 Near the end of the session, a coach helped with a few more skating skills, and discovered that Elise needed smaller skates than I put on her, so now we're all set for our future lessons!

All in all, this was an absolutely amazing experience. And now our girl is ready to play! Thank you Junior Sharks Girls, and thank you Cori, our new hockey hero!

My big question with hockey, or anything on ice, here is when is your skate time. It seems as though in this hockey crazed town, the younger and less male you are the weirder the ice times. I know moms and dads who drag sleepy kids out of bed at 4:30 to suit up to be on the ice by 5:30 or some other ungodly hour. Maybe I am simply not a big enough fan but there is no way you would have ever found me regularly getting up in the wee hours--as in weekly or even two or three times a week--for any sport that my kids might have interested my kids.

Bravo to you if do!

That's a good point, Aunt Linda! Dunno when the ice times are, but classes are very convenient. I've seen some adult leagues with crummy times, but maybe should be paying close attention to what the kid hockey schedules are.

I know the figure skaters get the short end of the stick ice-time wise, so we're going to stay away from that just on principle. ;-)

Who cares about ice time. Hockey is about being tough. Grrr! I want Elise out there slamming the opposition into the boards. Bam! I see my granddaughter as the enforcer - the one who teaches the other team not to mess with her or hers. If that means skating at 3 AM then toughen up and go to it.

Wait that isn't how I imagine my granddaughter. Let some Canadian boy with a broken nose and missing teeth do that.

Wow.. she looks TWICE as big when she's all geared up :)

Big smiles at the end, I hope!

Thanks for sharing the experience.. as Karl said - tough tough game!