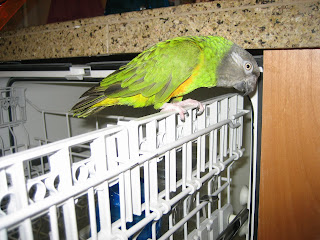 Señor Turkeyfeathers has been feeling his oats. We've been spending LOTS of time with him lately, and it seems to be improving his overall outlook on life. He certainly weighs more. All of that climbing and wing flapping suits him.

However, the one thing that doesn't seem to be changing for the better is his reaction to dish washing. I think he feels like he's joining in on the excitement. So, I've tried an experiment or two.

Normally, I don't let him on my shoulder, so it seems to keep him just confused enough to be quiet while I put some dishes away. Sort of. He gets bored and antsy. So, here we have him hanging out on the dishwasher. He liked that, but not in the way I had hoped. How exciting! Grrrr. I'm now working on developing some "incompatible behaviors" for him to engage in on cue so that we can get the dishes done without having our eardrums broken. 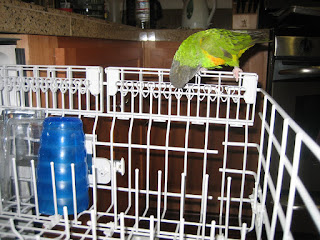 In the mean time, he continues to "help" with the dishwashing, at least for now.